I’m trying to set up LDAP on a fresh install of Openfire 3.7. Our AD structure is rather odd and I don’t know if it will even work. I didn’t set up AD, I just have to live with it the way it is. Our local domain is sd_corp.local. I’ve attached a screenshow of how our structure is laid out. Users are in folders by mostly by location, but some are in a folder called ScreensaverOmit. I don’t know why it was set up this way, so I don’t know if we’ll actually be able to use LDAP. Has anyone been able to get this running with more than one user folder? 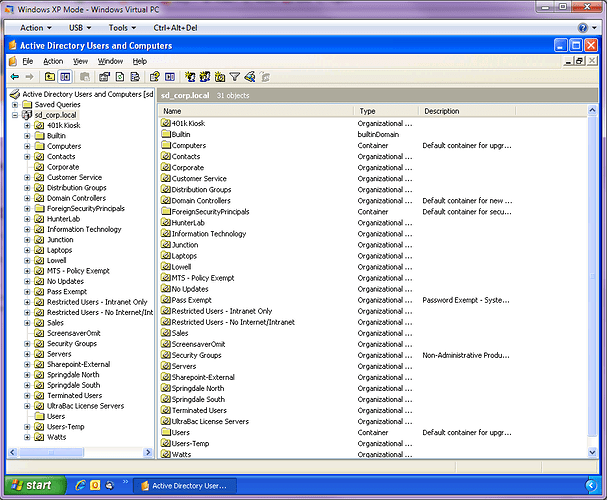 Openfire should work just fine with that set up. My users in AD are spread across multiple folders. You probably just need to make the Base DN something like: dc=“sd_corp”,dc=“local”. In any case, it should work.

As you said, you didn’t setup this domain, but i must say, what a mess Computers, Users, everything is in one place… Anyway. Openfire should be able to pull just users. Though it can pull users which shouldn’t be in Openfire (like admins or system users), but you can setup filters to specify what you need. Can’t advice much about those filters, LDAP syntax is not my expertise.

In the efforts of expediency, I just ended up going with the database end instead of LDAP. It’s up and running and I don’t want to mess with it. I did, however, use groups within Openfire and that has pretty much given me exactly the end result I wanted. I may try the LDAP way again when we upgrade down the line.