The ignite realtime community would like to announce the final release of Spark 2.6.0.

After more than 3 years, we have moved the product quite a bit and it has to be noted that the contributions came from all over the world to make this release possible. Numerous issues and feature requests were adressed duringt the development phase:

More details can be found in the attached changelog.html

The download links for the release 2.6.0 are on the Downloads page.

The next release 2.6.1 will follow within the next 8 weeks and include some more graphical and functional enhancements. We would appreciate contributions to the source code.

The first issue I noticed is that with the RC 2 release, I was able to block contact from users that were assigned to a group, which normally can’t be done. Now that I’ve upgraded, they still show as blocked but I have no way to unblock them.

I’m guessing the only solution I have would be to completely uninstall and delete my user settings and then do a fresh reinstall.

The second was that as far as RC 2 was concerned, I had the latest version, while those with the previous release had a message come up that a new version was out.

The third, which happened in RC 2 was that I’m using a large emote pack from Something Awful. When I was doing some setting in My Preferences, the screen got really large, strecthing across both monitors. After closing that screen, I’ve never been able to get it to come back again. I was hoping it would with the latest release but it still doesn’t come up.

Btw, anyone upgrading from 2.5.8 should notice a slight pause upon first launch. As this version of Spark will import your old profile to a new location at AppData\Spark

You should report your issues in the forums (and one issue per thread preferable) as it is hard to discuss and monitor issues in blog comments.

It was when you’re looking at your contact list and right click on someone, the last or second to last option had an icon of a padlock and said something about block user. After you do that they’ll have a padlock next to their name in the contact list.

It worked perfect at my job for those groups of people that will still pester you even though you don’t want to be disturbed. It’s almost tempting to go back to RC 2 just to be able to keep that feature since I can’t go into openfire and adjust my roster that way, since everyone sees everyone else because we setup the groups like that.

When I get a chance, I’ll move all this to the forums. I wasn’t sure where it should go.

I think those block user buttons were Konstantin’s first implementation of privacy plugin, Walter. Probably Eric needs older version to unblock everyone (or a new profile, if it is not stored on the server).

we’ll go on working on privacy plugin and make it a bit more user friendly until 2.6.1

hope that will fix your problem. for future, please post such comments in the forum. some of our committed person will create tickets for that issue if necessary.

help us to improve spark

Thanks for the tip. I still have the issue of Preferences not being able to come up, but at least I’m a step closer.

It looks like the Spark changelog and readme haven’t been updated yet. Are there plans for that?

Just installed the new version on my Mac. I can no longer copy/paste into or out of instant messages – seems like a crucial feature; am I missing something?

The biggest complaint from our office amongst Mac users is that when you get a message, the dock icon bounces only once, so if you have your dock on auto-hide, you’ll never see new messages (I think this is standard Mac IM client behavior). I don’t know how many times I’ve sent messages only to get “oh I just saw this” as a response hours later. This is still not addressed 3 years later?

Also, the tabs have visual bugs in the IM window.

I would complain about it not looking remotely like a native Mac app, but functional bugs like inability to copy/paste make it nearly unusable.

please use the forum to get help

there are already posted some of the issues you are talking about.

hey spary, thanks for reporting. sadly spark is actually not fully supported because of some problems related to apple’s java vm. spary schrieb: I have noticed a couple of issues with the 2.6 release for Mac: Copy paste does not seem to...

Spark should support Growl on Mac OS, if installed. If not we’re working on an Growl’like annouce system called Roar: 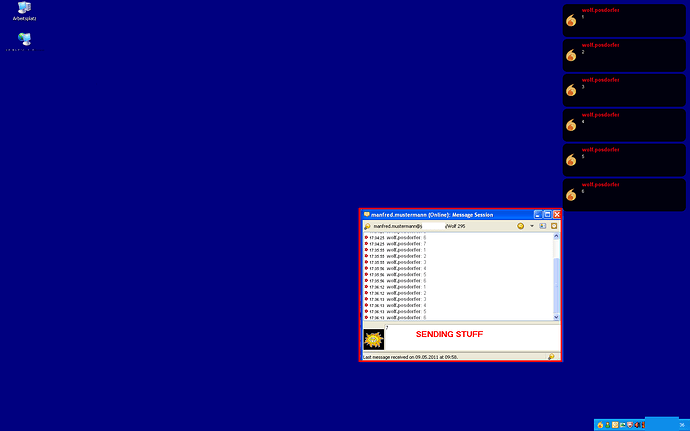 This is a known issue. All OS’s are affected by this problem. we are working that but the L&F is third party software . could also be fixed by changing to mac os x L&F

Walter, how do we get that changelog posted to the http://www.igniterealtime.org/builds/spark/docs/latest/changelog.html page?

I updated it this morning, reload the page.

It is not full. There are two parts with Spark tickets in Walter’s changelog. Also, we need to update the Readme file. I see that Wolf has updated it here http://fisheye.igniterealtime.org/changelog/spark/?cs=12363 but it still says 2.6.0 Beta 1.

I have created a document describing how to enable STUN on your server and get PC Call button back. http://community.igniterealtime.org/docs/DOC-2187

Also i have a proposal to add login server as STUN server automatically into spark.properties file SPARK-1334

For the record, the proxy is not a work around. There are valid security reasons for not wanting the proxy. I don’t want a file cached by a third party. This is a very serious bug and from what I am piecing together this week it is rooted in Smack. Why doesn’t in band work as a fall back?