Hello! Is there anyway to bring the memory usage down? At the moment spark is running around 50,000k memory on all of our users machines. Most of these users are programmers and have a lot of bulky programs open and can’t have an IM using up this much memory! LOVE the product though and would love to keep utilizing it! 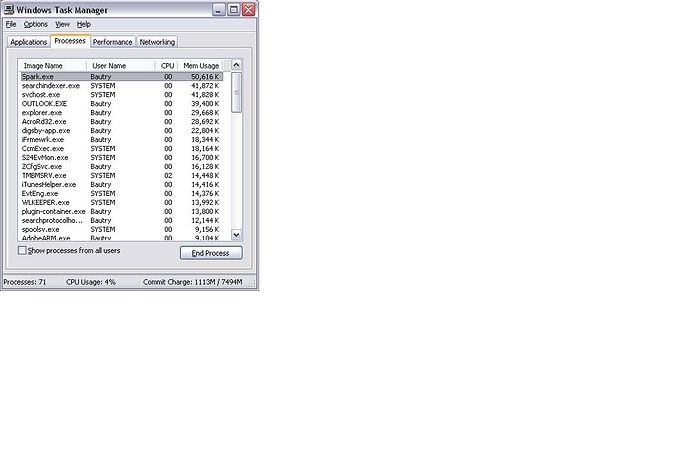 it is java based and thus it needs 40-60 MB. Anyhow 64 MB are not much, Firefox uses 300 MB or more and recent computers do have 4 GB memory. So I do not complain about the memory footprint. There is little which you can do to reduce it. You may want to read Spark JVM Settings and Spark.cmd start script and try to decrease the memory usage but this will likely cause OutOfMemory errors.

Thank you very much, yes I understand that other apps use a ton more but I just had some users complaining and was curious! Thank you so much for your answer!!

If their coders and their bothered about how much memory spark is taking up, they probably need new pc’s!

I’d probably be more bothered about how much memory I Tunes is using on their computers from your perspective. If their that bothered about memory usage, maybe suggest they get rid of the things off their pc’s that arnt work productive, instead of your company IM program

Testing out the latest SVN release and Spark is using around 130MB of ram.

Don’t think my install has ever gone above 45MB memory usage wise, even if i’ve got three or four chat windows open

After doing some testing I’m up to 175MB usage, extra memory is used for each new message and after having up around 2000 message in four chat rooms it has climbed significantly. Appears to be a memory bug.

Also noticed after closing out of the windows garbage collection never occurs freeing up memory.

To me it looks like a memory leak in toast popup. What if you try disabling popups and check memory usage? Filed as SPARK-1177

I have also tested, I think it is seriously memory leak. I make a lot of ChatRoom(GroupChatRoom). It’s not release memory ， even if close all ChatWindow. And memory increase continually. At the end of this, It’s out of memory and Spark exit

We modify it, and then all about ChatRoom’s resources are released.

Just to confirm the 11/9 SVN build still shows this bug.