Hello, can you help me, I use broadcast plugin and I need add contact all@broadcast.servername to everybody’s roster. How can I do it?

Maybe there are other ways like adding it directly to every user’s roster via Admin Console. I have tried to create a group in Admin Console, add all@broadcast.server as a member. Openfire might hang while doing this, but it actually adds it. Then enable sharing for this group, so it should appear in every user’s roster. And it appears, but when i tried to send messages using it, it either disconnected me or nothing happened. It is not designed to have such objects in a roster. Sometimes it works like adding Fastpath queue to a roster, so users can initiate support call by sending a message to that “user”. But it doesn’t seem to work that way with broadcast. Maybe your client has other means of broadcasting? Say Spark has Broadcast menu option and you can select all users with a single click.

Sorry I don’t say, I use AD and can’t add users manually, also i use MirandaNG as client, it have multiple messaging but broadcast working much better.

There is an option to use Hybrid Provider setup and use both LDAP and local users. Though i haven’t tried this myself. And it is kind of clunky (see Speedy reply here Hybrid auth (local + LDAP) is supported).

You can try opening users profile in Admin Console, go to Roster menu and add new item with all@broadcast.server as JID. Maybe it won’t work either because of LDAP. Or maybe you can try adding such user manually in Miranda. At least to try and see if adding such user actually works for sending a broadcast. Can’t help more.

manually adding user all@broadcast.server to roaster on server or add in contact list in miranda work well I try it before

Well, then search the forums about Hybrid auth and try enabling it. Then add local groups and this contact. 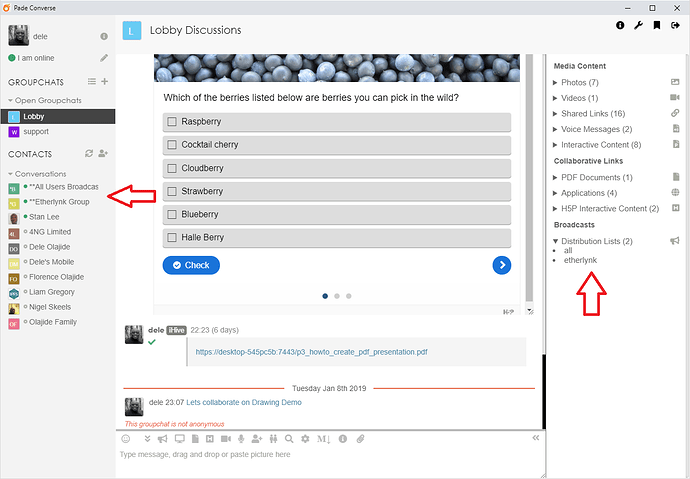 Clicking on the group name will open the chat window for that distribution group.