Two possible ignite logos are attached. We definitely have a preference at this point, but would love your feedback.

I like the upper one. It’‘s brighter, looks better in “mini” format, and it has a cool … scifi ish thing to it. The bottom one kinda looks like a candle though I’‘m pretty sure it’‘s supposed to be an i, and it doesn’‘t look great in mini form (i can’‘t tell what it is). It’'s also darker.

+1 For the leaning, snowman of fire one.

Seriously though, I think the top one has more of a symbolic feel to it rather than simply a stylized “i”. Plus, the bottom one looks a little too much like the image Apple uses for Quicktime Podcasts:

We had found that same logo – too funny. We’'re all leaning towards what I like to call the “crop circle” (top) logo as well.

Perhaps, it could be called a “glowing dumbbell”

I don’'t like the i much, if one inverts the color / creates a negative image the i becomes even more visible and i-Pod like. The o around the i does create a nice tunnel / 3D effect but the i itself looks to be wrong there.

I like the upper logo, it could symbolize a client server environment. One could even create a pulsing version of the upper logo or an animated one with more clients. Or a an image map so one can click the client and the server.

And if you ever add a graphical display of the connected clients, servers and connection managers to Wildfire it may also look like this. I’'d really love to see this, with the used bandwidth on each connection.

I agree with LG and Cyclone - top one.

Thanks all for your feedback. We’'re in agreement with you guys on the top logo, which makes the final design the attached image (shown on black and transparent). 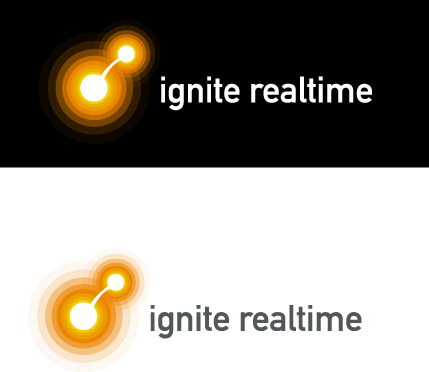 Message was edited by: cyclone

The lighter background is also nice.

Message was edited by: Martyn

I’'m quite sure that only little people enjoy a black background or dark-colored design, so I wonder how this logo could integrate in the Ignite web page.