Learn Git Basics in about 15 Minutes

Since most (all?) IgniteRealtime projects are migrating to using Git as version control, hosted on GitHub, I thought I’d share this with the community.

Learn to use Git

This is a quick tutorial on the basics of using Git. The tutorial is *not *GitHub specific, but rather is just a primer on using Git’s basic functionality. It will only take about 15 minutes to complete, so you can git (haha) it done on your lunch break

Funny, but maybe not the real world scenario which one will use.

Well, yes and no. You’re right, if you are contributing to a project, you likely won’t be initializing many new repos… however, the tutorial does show which git commands are common, and their basic use-cases.

When working with an Ignite repo on Github, after forking, the usual workflow commonly involves making new local branches, tracking changes and new files, committing and merging back into your fork’s master branch, from which you likely will issue a pull request.

These commands are really central to using Git. The tutorial will not make you a Git Wizard, and if you are familiar with Git already, there’s not much you will take away. But, we do have a lot of new members in the community, so spending a few minutes to learn some basics isn’t too bad

I use Git daily in my day job and never bothered to learn the commands. I just use TortoiseGit on my Windows dev PC. Just select the folder, right click and do a clone, pull, commit and push

I have some forked Git repos, but I still need to set them up properly. Commands for creating the first fork, syncing the local clone with updates from the Igniterealtime master to get an up-to-date clone would be more helpful for me.

No idea how to update the changes from master into my local clone with TortoiseGit even though I have it installed … I always use the command line.

Maybe we can create a short document (without long descriptions) with similar content:

I believe using git via it’s command line is something everyone should do, as it’s really beneficial to your development workflow. Tortoise(SVN|Git) is a terrible abstraction.

For people like me who do not develop code every day a GUI is more easy to use. I use vi often but I would not recommend it to people who need to edit or write someting once a year.

I guess I’m one of the last command line ninjas!

A document would be a good idea, at least showing for each project the basic commands to get going.

The GUI tools are nice, until you need to do something slightly more complex than they allow (like use upstream repos). Git is a very powerful tool and can do a lot of really neat things. Github has a decent GUI client as well for win, mac, linux, and now android and ios.

“Fork” and “Pull Request” are Github terms, but basically it’s an abstraction for cloning the original repo (to under your github account), and then working off your clone and eventually submitting a request for the upstream maintainer to “pull” your changes in. For resyncing your forks with the original master repo (upstream), you would need to add a new remote to your repo.

then you can do things such as

which will pull down changes and fast forward your repo. This essentially does a merge of the upstream master into whatever repo/branch you are currently in. As with most things, there are multiple ways to skin the [octo]cat. (github refrerence lol). Sometimes you may want to use git rebase instead.

Merging brings two lines of development together while preserving the ancestry of each commit history.

I tend to prefer merge/pull upstream to get the latest changes, but sometimes it’s not desirable.

My workflow genreally involves lots of beer , and both github button smashing, and some git command line-fu.

7) git add . (git add . will add everything that’s either untracked, or changed. sometimes that’s not desirable, in that case, you can add individual files with git add the/path/to/the/file and wildcards are acceptable)

9) git status (sanity check to make sure nothing was forgotten)

10) git push -u origin myNewFeatureOrBugFix (this creates a new branch on my fork’s remote, in github)

11) Now I go to github, and click the Pull Request button and write a description about the pull request for this commit. Then sit back, relax, and wait for the pull request to be reviewed by the repo maintainer/lead. 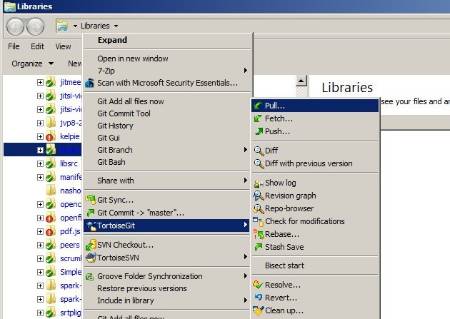 this was on hacker news (news.ycombinator.com) this morning: