Dears,
I want to estimate Bandwidth requirement for Openfire server.
I came up with this table. what do you think, am i going in the right direction?
if so, are these items are all that I should take into account or there are more items that I should consider? 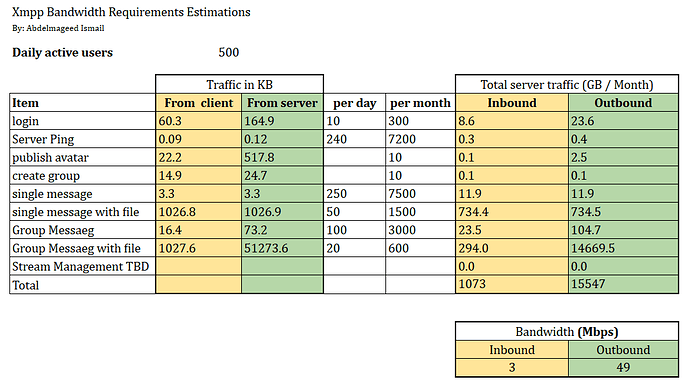 I don’t believe that a generic estimate can apply to Openfire. Traffic depends greatly on the behavior of the users, the client implementations used, but also how things evolve over time. I’m not saying that your estimates are wrong - but even if they are right today, it is impossible to predict if they will still be correct tomorrow. Something as simple as a client making it easier to change a file, or use a higher resolution when storing an avatar for a user, or starting (or stopping) to cache avatars from users can generate wildly different results.

Your numbers are oddly specific. That suggests that you have been capturing and counting traffic on your server. That is probably the best approach for this: measure your environment, and try to extrapolate what this means if your user base grows. Still, expect things to be a lot different from what you expect.

It’s worth taking into account that most stanzas are text-based, which in size (in context of modern internet connectivity) is almost negligible for 500 users (we were doing this on mobile phones back in 2006 over 2G). If you start doing file transfer or video conferencing, that’s where things will take off.

You are right, I did captured and counted the actual traffic in the server. and the traffic was coming from a specific client which will actually be used by the users. as it was a sample traffic, it didn’t represent the
actual behavior that is why id made some assumptions.

As you can notice I calculated traffic of a one month period and then from that I calculated the needed bandwidth. doing the calculations for a month is too far from reflecting the actual behavior, for instance, all users might decide to send some files in their groups.

Regarding the validity of the estimation and its dependability on future changes; I agree with you, we will keep this in mind.

Thank you so much Guss