I was wondering if you guys could help me verify some stuff for me. I’m planning to do an upgrade on our Openfire installation that is installed on Windows Server 2008. From what I understood from the documentation all I should have to do is backup the directory it’s currently installed in and install 4.1.1 on top of it without any issues. Is that right?

It’s a bit strange but I found that the actual openfire.exe is actually located in C://Program Files/Wildfire/bin. From what I understand Wildfire was what Openfire was previously known as. Is it okay to install Openfire on this installation? Or should I just create a new directory when I install 4.1.1 and move over the data?

Thanks for any help you can give! Let me know if you need anymore information from me! Sorry if something didn’t make sense

Something else I just noticed:

Looks like someone else tried to update awhile ago (see attachment)… 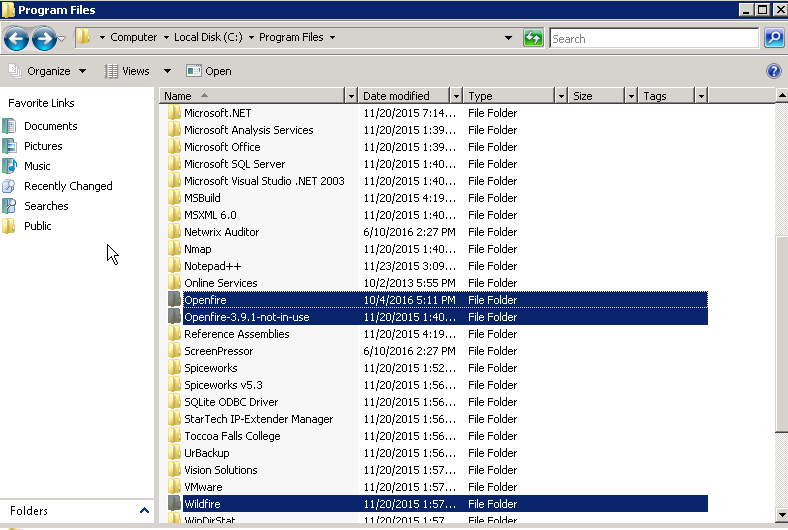 Upgrading from such an old version might not be without issues. Yes, do a backup, but first make sure you truly know what folder your server is running from Wildfire has the same modify date as that 3.9.1 folder. It seems that someone tried to install Openfire 3.9.1, then tried to rename Wildfire folder maybe and then renamed it back as 3.9.1 didn’t worked magically probably. Then there is another try in 2016 to install Openfire, but it probably clashed with currently running version. Anyway, a little mess

After you find out that it is really running from Wildfire folder, i would do a backup of Wildfire folder. Then unisntall Wildfire/Openfire and remove all folders from Program files. Then i would install 4.1.1. Then i would install Openfire Windows service (as per install guide). Then i would run that service and go to http://localhost:9090 and go through a setup process. Then i would stop the service and copy the embedded database from a backup on top of one created during the setup. Then run the service again and pray for a miracle. That’s assuming you are using the embedded database now (there is a folder embedded-db in the installation folder with a few files in there) and not using AD integration.

If that doesn’t work, then you can try downloading every version of Openfire since 3.7.1 (check changelog for version numbers, you can download any version by replacing numbers in the current version’s download link) and installing one after another on top of the current one into Wildfire folder.

You can always leave that folder named Wildfire, it’s not that important for the Openfire where to run from, but that would be confusing for you and maybe someone replacing you when Openfire is not in Openfire folder

Awesome, thank you for your response, very helpful!

I did some more digging and I looked into the current Wildfire\embedded-db and saw that it was only 8.6KB, also the files had been modified in 2007 (see screenshot). So I went to our http://localhost:9090, checked under Server Information and verified that the Server Directory was under Wildfire (screenshot), and then I noticed a Database tab. Under that I noticed that under DB Connection URL it looked like one of our databases. So am I correct in assuming that user profiles and groups, and all that actual data could potentially be linked through a completely different area than the embedded-db?

Sorry to throw all this info at you! I’m just really confused on how the original person set this up. 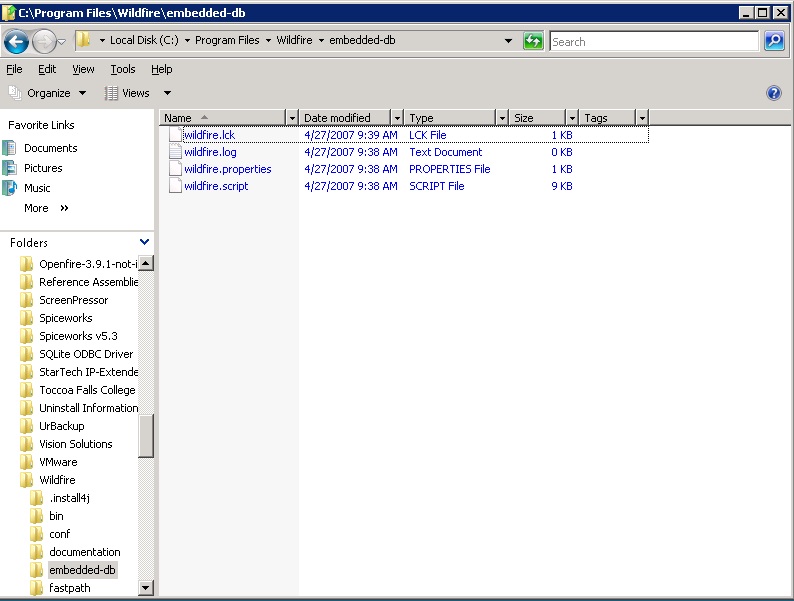 Yes, it looks like you are not using the embedded database (hence the old modify dates). maybe the person who installed it at first tried the embedded variant and then decided to change it, so the files were left over. You are now using MS SQL. Can’t tell is it on the same machine or somewhere else (hidden information). In this case you don’t have to copy anything. But during the setup you will have to create a connection to this database (you have to know the user and password for this database). At the end of setup it should connect to that database and your server should start with all the users and groups in place. Assuming that all upgrade scripts run ok. You can still do a backup of Wildfire folder, though most information is stored in the database. Openfire/conf/openfire.xml has limited configuration, like database connection string, a few ports. You should do a backup of your MS SQL though. And you should know how to restore it, if something goes wrong.

Sweet, I’ll see if I can start backing that up. Thank you so much. Let you know when something goes wrong again .